On the morning of July 24, in Hanoi, Vietnam Trade Union organized the 90th anniversary of the establishment of Vietnam Trade Union (July 28, 1929 - July 28, 2019).
Speaking at the ceremony, Mr. Tran Thanh Hai, Standing Vice President of the General Confederation of Labor Vietnam, recognized and appreciated the important contributions of the Vietnam Trade Union to the glorious tradition of the Vietnam Trade Union, especially Trade union officials were sacrificed for the cause of national construction and defense. At the same time, the Vietnam Transportation Trade Union is requested to make an important role in the trade union system in the coming time, effectively implement key issues such as: Promoting the role of trade union in the main system. concomitant with the focus on building strong grassroots trade unions; Improving the effectiveness of representation, taking care of union members' benefits, protecting workers for sustainable jobs, increasing living standards; Good implementation of the principle: "Superior levels serve lower levels, trade unions serve union members and workers" ... Comrade Tran Thanh Hai, Standing Vice President of Vietnam General Confederation
Steering speech at the celebration
Congratulating the Vietnam Transport Union on the occasion of the 90th anniversary of the establishment of Vietnam Trade Union, Member of the Party Committee of the Party Committee, Deputy Minister of Transport Le Anh Tuan affirmed that in the past 53 years, Vietnam Trade Union always follows the policy. , Party lines and resolutions, policies and laws of the State; the direction of the Party Committee of the Ministry of Transport and the Vietnam General Confederation of Labor; apply creatively and concretely into programs and labor force movements to encourage employees of the whole branch to enthusiastically emulate patriotism. Vietnam Trade Union has constantly renewed the content and operation methods, always accompanying agencies and units in successfully implementing the tasks of the Industry; well perform the function of participating in managing and taking care of life, employment, and representatives to protect laborers' legitimate and legitimate rights and interests; consolidate and raise the level and sense of responsibility of trade union officials at all levels; doing well the development of union members, building a strong grassroots trade union, deserving the role of a firm and reliable supporter of workers in the industry. "The Vietnam Transport Union has mobilized the movement of CBCN-employees in the sector to actively respond to the emulation movements, the traditional culture, mobilize the construction of the socialist fund, thereby creating the spread, contributing to improving the efficiency of the work. work, business, create a friendly and civilized working environment at the agencies, units, enterprises of Transport industry ... - Mr. Tuan affirmed. Mr. Viet said, in order to celebrate the 90th anniversary of the Vietnam Union Trade Day, the Vietnam Trade Union has directed all trade unions in the industry to organize many practical activities, propaganda and education about the traditional looks. wine of Vietnam Trade Union. Right from the beginning of 2019, Vietnam Trade Union has coordinated with the Ministry of Transport to launch emulation to all agencies and units in the industry; Organizing "Month of Workers", the Launching Ceremony responded to the Labor Safety and Hygiene Month in 2019, the Launching Ceremony "Drinking alcohol-No driving" among cadres, union members, workers and employees of the Transportation industry. Organized a commendation meeting for 160 outstanding labor workers typical of the industry level; direct 6 regional traditional culture groups to organize many cultural and sports activities, exchange and create exciting atmosphere in workers and employees. Organized the "Beauty Union and Labor Transportation Industry Contest" Photo Contest, there were 13 award-winning works. In the first 6 months of 2019, there were 105 recognized works, 187 initiatives were applied with value of more than 23 billion VND; request the General Confederation to give 15 Degree of creative labor to workers and employees.
In addition, Vietnam Transport Union's Charity-Charity Fund has timely visited, supported and presented gifts to 826 Laborers in disadvantaged sectors, supported to build 3 "Labor Union" houses; donating 250 gifts, supporting the construction of 13 "Love" houses for former TNXP, former Truong Son soldiers of Ho Chi Minh City Vietnam in difficult circumstances and carrying out many other social activities ... Total amount expenditure for the above activities is more than VND 3.5 billion. 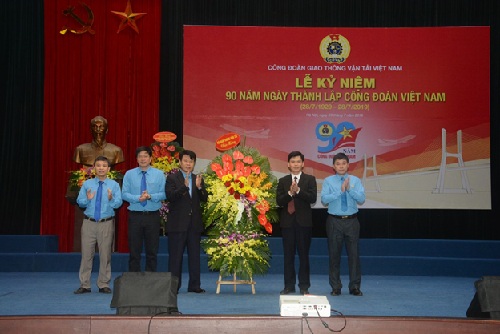 Deputy Minister of Transport Ministry Le Anh Tuan on behalf of the Ministry of Transport leaders gave flowers to congratulate the Vietnam Transport Union on the occasion of the 90th anniversary of the establishment of VN Trade Union. Ministry of Transport leaders, GTVTVN Trade Union gave flowers to congratulate the Vietnam General Confederation of Labor on the occasion of the 90th anniversary of Vietnam Transport Union 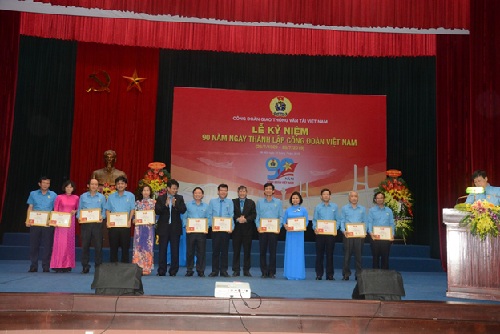 Comrade Tran Thanh Hai, Standing Vice Chairman of the General Confederation of Labor and Comrade Do Nga Viet, Chairman of the Vietnam Trade Union awarded medals to the labor union officials with a lot of merit. 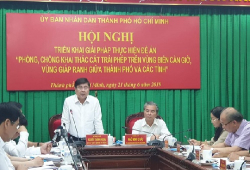 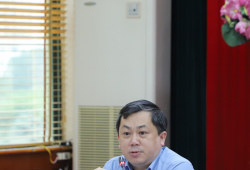 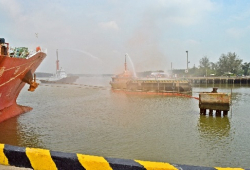